Today ends our time in Rocklands. Since I haven’t written much this week, let me use this post to fill you in on all the sends that you’ve missed.

So Sunday we kicked our week off right with send-age galore. And Monday proved to be no different. We headed out to 8 Day Rain with a big crew, half of whom were resting (including myself). My intentions to rest were sincere, but while spotting and taking pictures of Kyle on his first hard climb of the day, I was inspired. I decided to put in a few burns on Bushwhacker, a V8 line, while he worked the V9 extension, and I managed to send it in 3 goes with no warm up. It was pretty surreal for me, since that’s currently my hardest grade to date. Anyways, after that send I was pretty satisfied with my work for the day and decided to re-commit to resting.

Danny ending up sending quite a few classics including Crazy Legs, Bushening and Vanity. I followed around our crew taking hundreds of photos trying to find the perfect angles, while intermittently bugging another climber in our group, Will, for advice. He is a professional photographer who also happened to have worked for Rock and Ice (basically the dream). We were quite lucky to meet him, both because he’s a hilarious guy to climb with and because he took some spectacular pics of the climbing….and he taught me words like “aperture” and “iso”.

Some other awesome sends that I haven’t mentioned yet include: 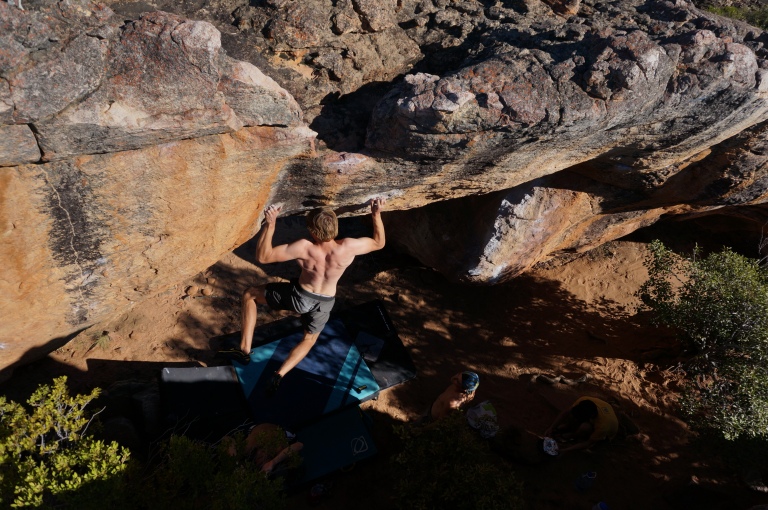 This week was filled with late night photo sessions, afternoon slack line lessons, going away parties for the various climbers, the discovery of “5 avocados for $1” at the grocery store, and the subsequent discovery of avocado toast (I ended up eating at least an avocado per day after that). There was a full moon party at the crag with a bunch of hippies and a South African girl taught me how to ‘poi’…basically you spin around lights to techno music. Our South African camp host/bar tender/pro photographer made us a traditional poiki last night, which is a delicious stew of lamb and vegetables cooked for a long time over a fire in a cast iron pot. It was a pretty great week. And to end it all I ended up sending my 3rd V8 of the trip this morning, when I woke up early to venture up the mountain alone and seek out some last climbs before the flight.

I’ll never forget such a wonderful trip. Two weeks out in the rocklands hardly does the area justice, but for now I have to return to my real life and start my surgical rotation. I can hardly wait for my next adventure!