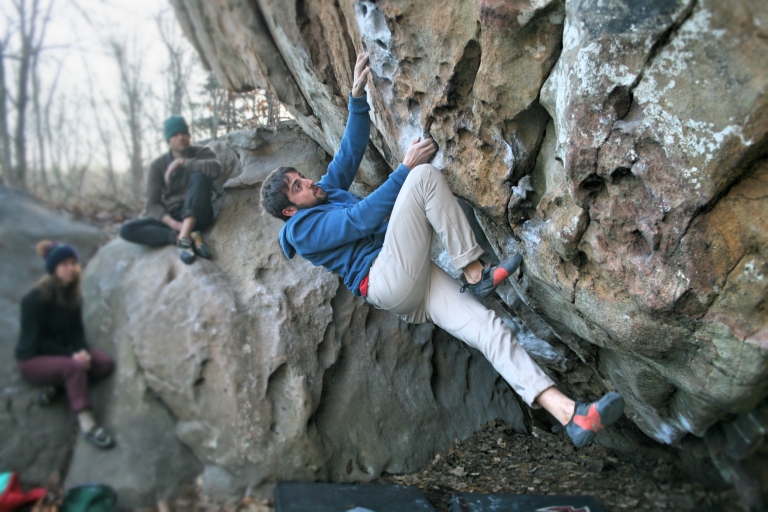 Access: If you haven’t already heard, Stone Fort is a pretty unique climbing area because the boulders surround a golf course. In order to get to some of the back boulders you actually have to walk across the teeing box on one of the holes. Another thing to note is that this place goes by the name of Stone Fort, Little Rock City, AND LRC–talk about confusing. Access is pretty easy, just pay the $6.50 at the clubhouse and you’re good to go–no need for reservations. One pro of having your boulders on a golf course is well paved roads to drive on, easy access to bathrooms, and a snack bar with hot chocolate and energy drinks! Plus, because beer is allowed on the golf course, climbers can also drink at the boulders, which many took advantage of this past week. 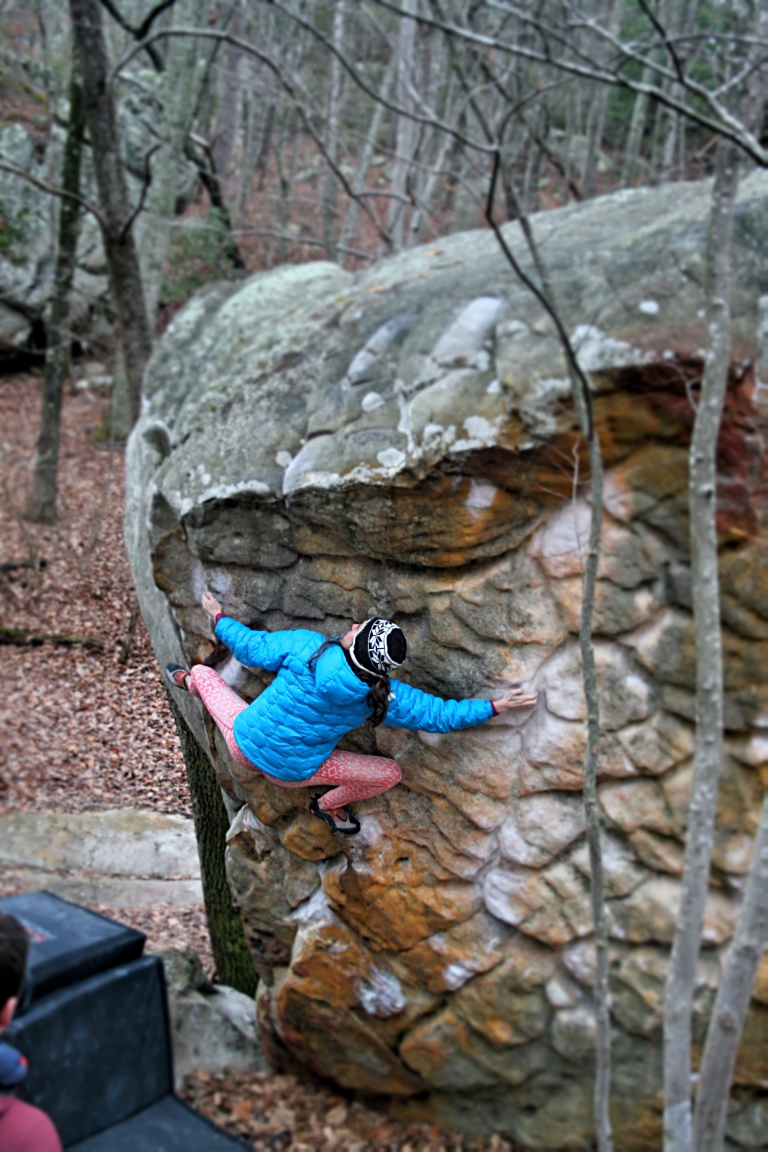 Climbs: What really struck me about the boulders here was number of technical slab climbs in Stone Fort. Most of my outdoor bouldering has been in Hueco Tanks and Arkansas, which don’t offer too many slab climbs. Stone Fort has some of the most beautiful puzzle-appearing faces with slabby ledges. 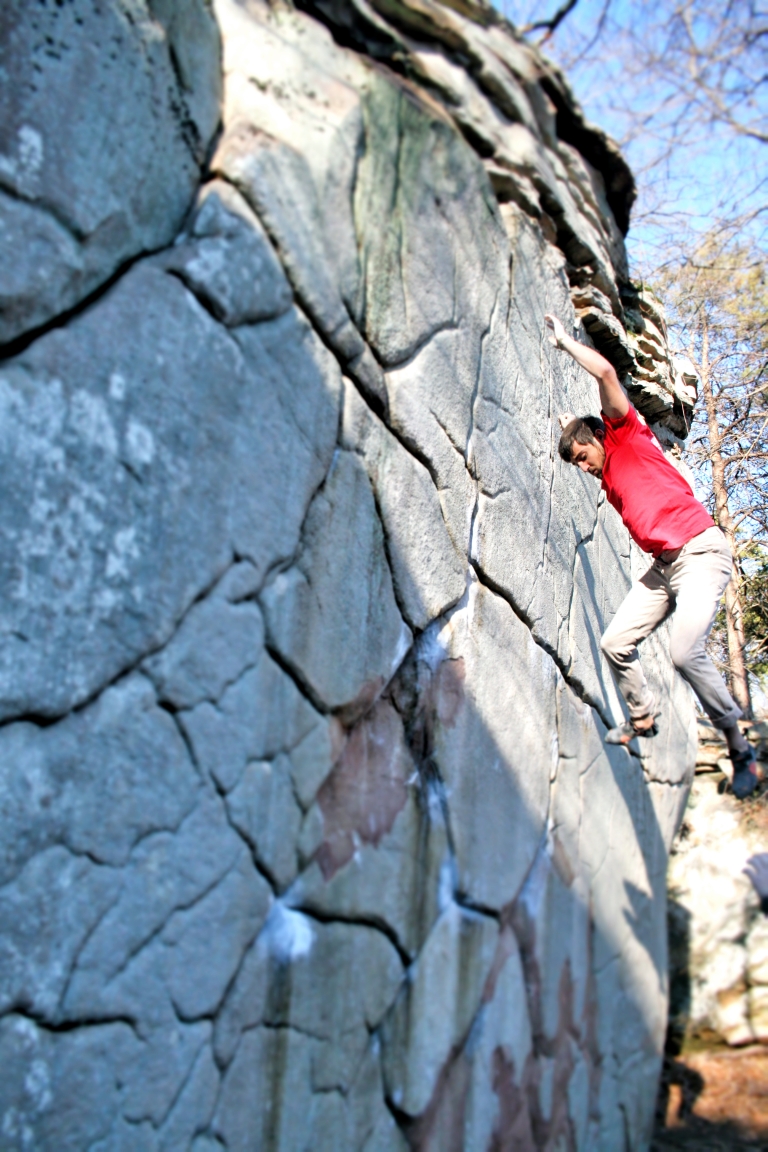 Many of the boulders seemed to be quite tall, compared to Hueco and Arkansas, so if you’re in to slab highballs this place is for you!  Some of my recommendations for awesome climbs would be:

Deception V7 –quite tall with a committing move at the top

Super Mario boulder–the is one of the few overhanging boulders, so no slab technique required (woohoo!); it has a V4,6,7,8,11 using many of the same holds

Jerry’s Kids–a classic face climb that has both painfully sharp crimps and tiny slab ledges; it has a a V4, 6, 7, 8 again using many of the same holds

Sternum V5 –this has a crazy cool sternum feature in the middle of the roof, but what makes it even better is the surrounding ribcage feature on the lip

Getting there: Google Maps took us to the wrong place. We typed in Montlake Golf Course and drove up the mountain, pretty close to the golf course but wound up on a dirt road that led to a dead end. For this one I would recommend just following the guidebook directions.

Camping: There is NO camping at the golf course (obviously). There is a pretty awesome hostel called the Crash Pad built by climbers in downtown Chattanooga, about 20 minutes away from the boulders (http://www.crashpadchattanooga.com/). I didn’t stay there but my friend Steven showed me around. There are bunk beds that you can rent for $28 per night and private rooms that cost more and prices vary by size. The place was impeccably clean and reassuringly secure–you need a key card to access rooms on each floor and even to get into the building. The communal area has a nice kitchen, a small living room areas, and a couple computers for use. This would be the perfect place to stay if you’re coming up by yourself and want to run into to other climbers to project with. Seriously, this place is nicer than many hotels that I’ve stayed at, and far and away the nicest hostel I’ve ever seen. I will definitely be staying here in the future!

If you’re not out climbing, there’s plenty to do in Chattanooga to fill your rest days. There are a surprising number of delicious and unique local eateries plus some fantastic bars. In the two days we were there we managed to see The Terminal Brewhouse, which brews their own beer in house  and Clyde’s on Main, which has dining tables made of pinball machine and a netted off area near the bar for ping pong.

There are two main climbing gyms, if you need to get even MORE climbing in: High Point and Tennessee Bouldering Authority (also called TBA). High Point is a GIGANTIC gym, with fairly tall walls for sport, an awesome kids climbing zone (I really wanted to spend my whole session in there), and a ton of bouldering space. TBA is a no frills wood gym, that’s much smaller but will give you what you need.

If you need some gear or a guidebook, head to Rock/Creek. There’s a bunch in town, but the one next to the Whole Foods has the most climbing gear and the most guidebooks.

Check out a few of the climbs we managed to capture on video: