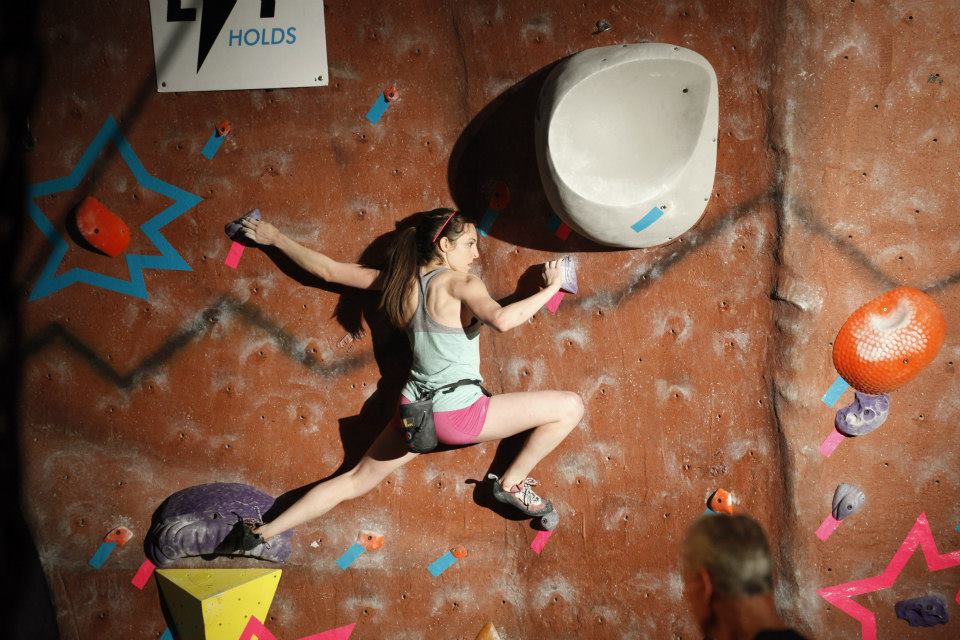 For the past two years I have really looked forward to competing in the annual Collegiate Climbing Series National Championship. This year, though, the road to nationals was a lot bumpier than it had been in the past. For starters, I began medical school earlier this year, and although I have worked hard to keep climbing a part of my regular routine I was understandably nervous about having adequate time to train.Plus this would be the first year (of my entire climbing career) that I would be training without the support of my awesome team back at the University of Texas. The cherry on top was the fact that two days after nationals I would be taking my end of block exams for school–four back to back tests in four days of some of the most challenging material of my academic life.

I started training in January for the competition in April, but I was honestly still unsure of whether or not I would even go to the competition. It wasn’t until late February that I registered for the comp. As if uncertainty about balancing med school and climbing wasn’t enough I began to struggle with the decision of which discipline to enter. In CCS Nationals there are three main disciplines: sport climbing, bouldering, and speed. My first love is sport climbing. I had competed in this category last year and placed 2nd! I was really exciting to get back some endurance and try to go for the gold. However, I had no idea how difficult that would be without training with a team, as in past years. Here in Houston I have some amazing climbing friends but bouldering seems to be king. I couldn’t really find a dedicated training partner so instead I would rope up with one friend on Monday for an hour or two, a different friend on Wednesday and so on, sometimes begging friends and staff to catch me. But of course no one really wants to watch you do 4X4’s on lead overhang for half the session, so I would end up doing most of endurance training on auto belay. Even though I was doing countless laps multiple times a week on the few autobelay 5.12’s, I was getting nowhere with endurance. After a month of mind numbingly frustrating stagnation I finally talked to a friend who convinced me to give bouldering a shot. Though I’ve never really considered myself a boulderer, my time spent in Houston has definitely help to change that. When I first came to Houston this fall the only gym worth going to was a bouldering gym full of some ridiculously strong people. The dynamic, powerful setting really helped me to improve, allowing me to send my hardest outdoor V grade, V6, back in the fall…followed quickly by checking off V7 and V8 in November. So I decided to register in bouldering and I made a drastic change in training with only a month or so left.

Training in medical school is a totally different beast than training in undergrad. It was pretty common to see me studying in the gym; I was definitely the only person with a laptop set up next to my climbs. I would climb between flashcards, climb between powerpoint slides and climb between practice tests. I would go to the gym in the middle of the day so that I could do my study/climb routine without being bothered. If I didn’t have time to make the 50 minute drive to the gym, I would set up my study stuff next to my home wall to do pull ups and system wall training in my tiny bedroom. (Shout out to my AMAZING boyfriend for building this for me for Christmas–I have no idea how he can possibly top that next year). Sometimes I even had fellow climbers from med school come to join me so that we could quiz each other while on the wall (yes, we’re total nerds)!

Training on the home wall

Anyway, you can imagine that after a few months of this I was beginning to get a little burnt out. Instead of climbing being my usual form of stress relief I had managed to turn climbing into something that was almost stressful itself. I was working on a pretty strict schedule and climbing was another thing to check off of the list. On the days when I was too exhausted to even put in a home wall session, I would sometimes feel angry at myself for not trying hard enough. All of this was really beginning to take its toll in early April and my climbing started to suffer. I would sometimes resent going to the gym. My frustration would carry over into my climbing, and I would fall on easier climbs, further fueling the frustration. The one saving grace was competitions. I can’t really put a finger on why they’re so different–maybe because I actually talked to people and didn’t try to study between sets. Yeah, that’s probably it! Anyway, the competitions I did on the weekends were always amazing. It would definitely fuel me back up for the beginning of the week. Nonetheless, my last week of training was still really difficult in terms of mental focus; I was definitely feeling the burn out. But I kept up with my schedule and still managed to leave excited and nervous to see what nationals would hold for me.

After I got in to Melbourne I was re-united with old team from UT. They are some amazing climbers who work exceptionally hard, take their sport really seriously and still manage to have a blast everywhere they go. They have climbers who had been to some form of national competition every year since they were ten to climbers who were about to experience their first national competition, ever. Hanging out with them and seeing their energy was, as always, super fun and really motivating!

The first day of competition was a redpoint qualifying round where you climb whatever you can for three hours and then total up the scores of your four most difficult climbs. The competition started off bright and early and was a little rough for me, but I eventually ended up with 4 climbs that I was pretty proud of. By the end of the session I had given EVERY climb within a 1000 point range (about 10 climbs) at least 5 tries, so I knew when I finished that I did as well as I possibly could have. I knew I did well for my round of competitors, but there were still two more rounds to go in the afternoon. I thought that the most competitive boulderers were in the later rounds, so I was pretty skeptical that my score would be good enough to get me into finals. But as 9pm rolled around and scores were announced I found out that I placed 3rd in qualifiers–I couldn’t have been happier! In addition UT had an amazing showing: Kendra Kwoka, Katie Dean, Zephry Lutz-Carrillo, and Joey Anthony in speed finals, Will Butcher and Christina Nguyen in sport finals, and Danny Aleksovski in bouldering finals.

Finals the next day was fantastic! Female bouldering was the first discipline to compete, so as soon as I got into isolation I started warming up. Since I had placed 3rd (out of 8 finalists) I was the 6th girl out. Waiting for my turn I had heard the shouting ahead of me and knew the first and second problems had been sent. The first problem had a minimalist start on a volume. I guess since it was my first problem I hadn’t quite gotten all the nerves out; I stood looking at the start hold a little confused and considered just whaling up. But I somehow got my mental self together and managed to flash the first problem, giving me extra time in the chair before my second problem to focus.

On my second problem I fell after attempting, what I think, was the intended beta. On my third go I decided to skip a hold and go for a match (yeah for small fingers!), and I managed to get the send!

The third problem started out with a jump and then went straight into some heinous slopers. I didn’t manage to get the send, but I definitely gave it my all and left everything on the wall.

I ended up placing third overall in finals, securing a medal and a spot on the podium! I was absolutely thrilled with my results and genuinely overjoyed with the results of my former teammates. After female bouldering came male bouldering. Danny was seeded in 8th place and managed to move up to fourth after a really impressive performance against some crazy strong competitors, including Josh Levin and Andy Lamb. He even sent a crazy dyno!

Then came speed. Kendra Kwoka, a first time competitor at nationals came in second for females! Joey Anthony, a former downhill speed skiier, came in first place for men and UT basically rushed the gym on him when he won!

Last up was sport climbing. Christina Nguyen did amazingly well. After only learning to lead last year, I am amazed by her and so proud that she made sport finals at Nationals. She really climbed like a pro and ended up placing fourth!!! Lastly Will Butcher, long time climber, won male sport–an amazing performance in his last year at CCS Nationals! 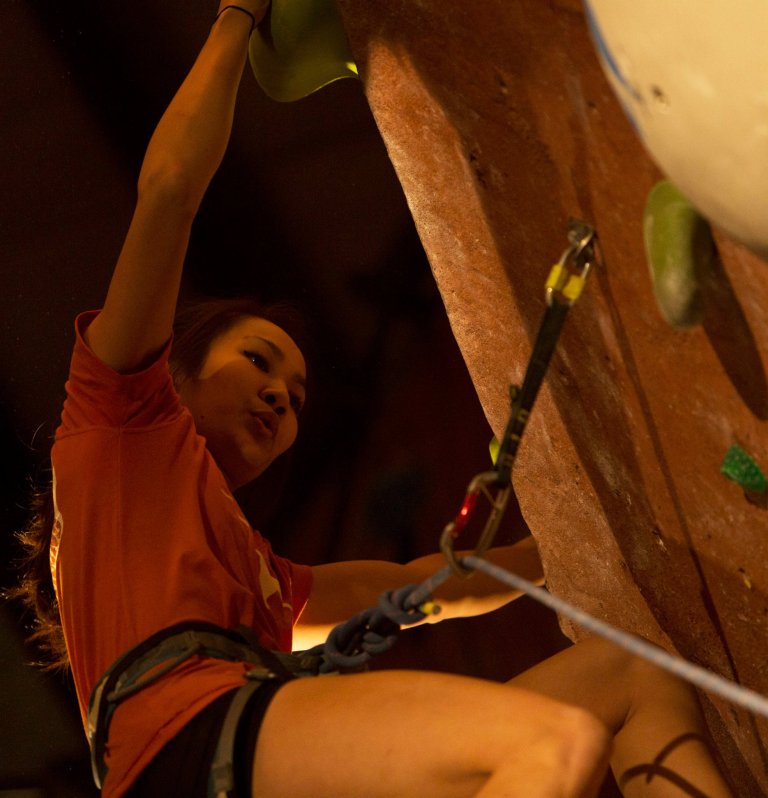 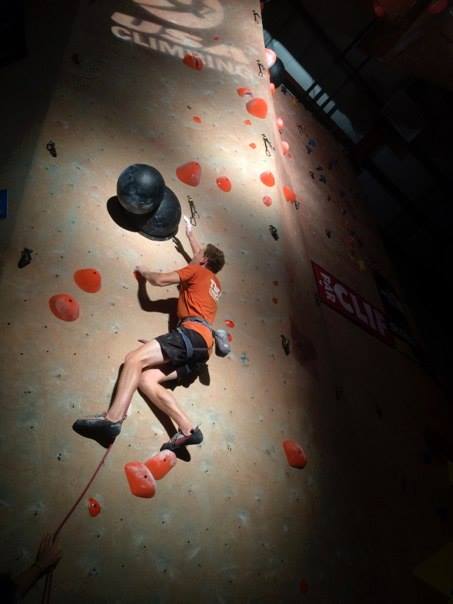 Will going for the giant ball on the male finals route 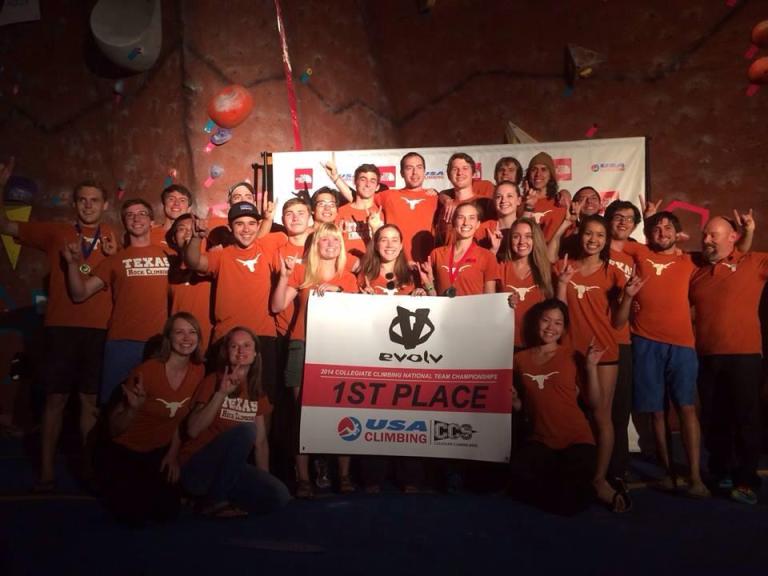 Overall, I am so glad that I decided to go to CCS Nationals again, even if it meant getting burnt out for a bit in there and really stressing over the decision to climb or study (or both!). Now that I’m back at school, I studying full time once again–writing this blog in my study break after a final. I am completely psyched to climb again, but I’ll probably take a break from training for a week or two. I’m heading up to Colorado after finals, so expect another blog soon!
Never make excuses!
Sarah